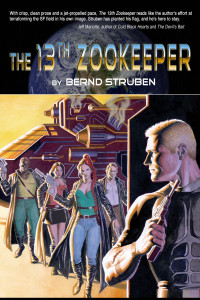 European writer Bernd Struben, author of 40 Years, One Bare Foot, and The Duke’s Dish, returns with a new science fiction novel starring an antihero readers will hate to love.

“With crisp, clean prose and a jet-propelled pace, The 13th Zookeeper reads like the author’s effort at terraforming the SF field in his own image.”

“The action is fast and furious, well thought out and not unreasonable, while the society presented on the planet is strange, yet relatable.”

“Bernd is one of those people who knows people – the dialogue is rich and varied, suiting the moment or event, with each character having his own voice and distinct personality.”

Scattered throughout the stars, mankind long ago lost its connection with Earth’s plundered natural wonders. In the most ambitious project ever undertaken, a remote planet is Terraformed to resemble Stone Age Earth and populated with all of the plants and animals of that time, including people. Known as Zooearth, the pristine world is guarded and maintained by a vast fleet of intelligent machines overseen by an elite force of twelve space-based Zookeepers. Auren Bilder is a hard drinking slacker, appointed to the Zookeepers via his family’s powerful political connections. He enjoys his cushy posting until he is caught fraternizing with the natives. Unwilling to return home in disgrace, he escapes to the surface to live among the tribes as a god. On the other side of the galaxy, a band of slavers stumbles onto a revolutionary biomechanical virus that can spread from human being to computer mainframe. Knowing Zooearth is virtually defenseless without its machines, the slavers plan to infect the entire network, eliminate the twelve Zookeepers, and raid the planet at their leisure. For all their careful planning the slavers remain unaware of Auren Bilder. The thirteenth Zookeeper hopes to wait out their raid in hiding, unwilling to risk his own life to protect his charges – until he is ultimately forced into action.